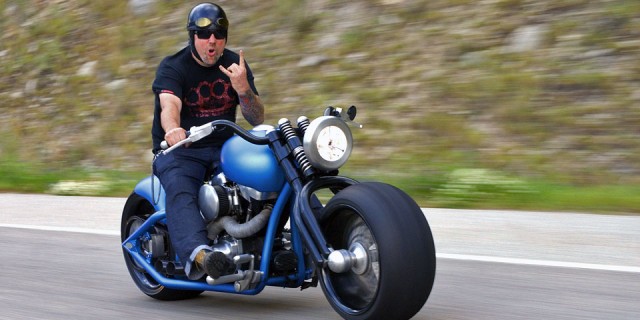 Robbie Kerr’s passion for motorcycles was ignited at an early age. In his hometown of Glasgow, Scotland, Robbie was introduced to the world of bikes by his grandfather, who was a keen biker.

His interest continued to grow and at 16 years old, Robbie built his first motorcycle, a ground-up build of a custom Norton commando, and also began his mechanical engineering apprenticeship with Rolls Royce Ltd. Building custom motorcycles from Japanese and British bikes became a steady hobby until he opened his first official business in 1990 in Scotland. Many of these creations went on to win custom shows all over the United Kingdom and Europe.

In 2000, Robbie immigrated to Canada, bringing with him his “Millennium Bobber” bike, which continued to dominate and win custom shows all over British Columbia. Eventually in 2006, Robbie discovered his “second home” in the West Kootenays where he settled down and founded Kootenay Motorcycle Art (KMA) in Nelson, BC.

Most recently in 2010, Robbie’s “Glasgow Kiss” custom bike competed in the AMD Ultimate Builder Custom Bike Show and AMD World Championship where it took home the titles for “Best in Freestyle Class” and the “Ness Enterprises Partner Pick of Excellence Award,” respectively. In addition, Glasgow Kiss has won several smaller shows around Canada and the United States.

Today, Robbie continues to craft award-winning, unique motorcycles and motorcycle parts because he loves to do it. His motivation for creating his striking custom builds is to bring the feeling he gets when riding, to his clients. And with a personal history of building over 30 original bikes with more on the way, Robbie continues to do just that.